History of 'The Original Butterflyman' 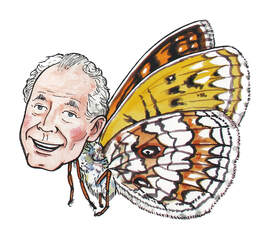 ​​If you venture into the tiny lanes between Carrog and Llangollen in South Denbighshire, you may be puzzled to stumble across a white farm-cottage cloaked in a colourful mist of giant butterflies. I’m proud to say the farm house is my home: how the butterflies made their appearance in this remote corner of North Wales is the story of my twenty-year struggle to realise a dream.

My tale began in the Spring of 1969 when I left the village of Glyndyfrdwy near Carrog, in the hills of old Merioneth, to fulfil a boyhood ambition to travel the world. I was a carpenter intending to finance my adventure by working my way from country to country. A year later in the backwoods of New Zealand I was approaching a cottage to enquire about work when I noticed the porch was adorned with a beautiful carving of a wooden butterfly. Its effect on me was so dramatic that it was like love at first sight. My first thought was how well they would look on the Welsh lime washed cottages, ‘One day I’ll make butterflies as beautiful as this and people all over Wales will rush to display them on their cottage walls’. I thought no more about it until I found myself in Australia in the slump of 1971. I was so broke I was forced to go washing windows. One morning after a restless night, I woke up thinking, ‘Why not try making money selling butterflies?’ So I began, carving them out of lumps of wood and painting them as best I could. It took weeks of painstaking labour to produce even a handful. Then I tried selling them. I was so desperate I even went round knocking on doors to try to make sales. In the end, the Aussies began offering mocking ideas - ‘Give it a go Pom, paint’em in the colours of local football teams’, was one version. Another suggested I should ‘Sell’em with wheels on mate, then the kids can pull’em along like toy aeroplanes.

It was hopeless, no-one wanted my beautiful hand-carved butterflies.By 1973 I was home again in Glyndyfrdwy and itching to start making butterflies in the old granary behind the farmhouse which I decided to use as my workshop. After months of frustration, I had to give up because the time required to carve even one was completely uneconomical. I hardly had the time left to earn my living as a carpenter. Around this time I was so disheartened I started giving a few butterflies away to friends. Perhaps in the back of my mind I was hoping that if enough people noticed them on cottage walls, it might stimulate some interest locally. There was no reaction so, rather than brood over the problem, in 1974 I went travelling to Canada, Alaska and the USA. When I arrived home again at the end of the year, I was surprised to hear that in my absence, people had been asking - ‘Who’s the man from Glyndyfrdwy who makes butterflies?’ What the true level of interest was I didn’t discover because I’d already planned to undertake the most important journey of my life - travelling overland from Mexico down through South America, to the Welsh Colony in Patagonia. I set out filled with excitement but fate had another surprise in store, on my first day, travelling in Mexico, I got mugged! In Patagonia I settled happily into the little Welsh hamlet of Trelew. One day I decided to give my landlady a present and in my spare time began to carve a very large version of a wooden butterfly. When it was ready, I mounted it on a curved piece of car tyre and fixed it to the wall of the house. That region of Patagonia is notorious for its strong winds, so as I set off to work later that morning, I was pleased to see that the rubber mounting attached to the butterfly was acting as a springy cushion quivering the insect and preventing the wind dashing it against the wall. At midday I arrived home to find the village in an uproar. Passing school-children looked in terror at the sight of a monster-sized butterfly fluttering on a wall above the village street. Before anyone could stop them or explain that their “monster’ was not alive, they pelted my masterpiece with rotten fruit. I saw the funny side of course, but I wondered if there was a jinx on my hopes of selling butterflies in Patagonia.

Seven years went by until one morning in 1982 back home in Glyndyfrdwy, on holiday from the Argentine and not being able to return due to the conflict over the Malvinas Islands (Falklands), the old urge came back to haunt me. ‘Go on’, it said, have one last fling at the butterflies’. I was afraid people had missed seeing my earlier models because they were too small. I decided to attract attention by making them up to eighteen inches in diameter - really big, in other words! After displaying them in many shops in Llangollen, my butterflies still would not sell. What’s more, the old problem surfaced of too much time and labour being necessary to produce one. Unless I could find an economical method of manufacture, I knew my dream was finished. I set about investigating how to make butterfly bodies from a mould. After months of frustrating experiments, I finally succeeded in making moulds good enough to produce small amounts of bodies. At the same time, I learned how to produce sets of wings out of high quality aluminium. Now I was confident of success. All I needed was the right outlet and since it was almost the first week in July, 1984, I was sure I would find it - right on my doorstep! There could be no better place to sell my magnificent ‘modern style’ butterflies than the Llangollen International Musical Eisteddfod! I set up a stall at the approaches to the Eisteddfod ground sure that a sizable proportion of the thousands of people passing, would snap up my butterflies like hot cakes, whilst my niece took payment. I was utterly shocked when the butterflies didn’t sell yet again. People have often asked me how I found the will to keep going at that time. I put it down to two things. First, that I’ve always been a very strong and determined person - for instance I don’t think most people would have persevered on a journey through South America after being attacked on the first day, as I was, and second, my unshakeable faith that if I could make enough people aware of the existence of my butterflies, my dream of seeing them decorating homes all over Wales, would be fulfilled. I also decided to carry out a daring ‘advertising’ campaign which had been in my mind for some years. To promote the butterfly business I believed key areas in North Wales had to be saturated by ‘give-away’ models of my expensively produced stock. As a result, large numbers of residents on all four main roads leading to Llangollen were suddenly surprised to receive free samples of these very beautiful house ornaments. When permission had been given to display these butterflies on a house, I would run up the ladder to fix one or two. I displayed them in Corwen and all round Porthmadog as well as the Llyn Peninsula and the Isle of Anglesey, areas I thought where tourists were likely to bump into them. During those months I was filled with excitement. I believe my unorthodox, though brilliant, marketing plan could lead to visitors from all over North Wales flocking to the farm to buy the butterflies.

Eureka! The ‘Break or Bust’ campaign worked! Business improved and the butterflies started selling in Llangollen. I must admit I felt vindicated and proud - not at having manufactured a thing which to some people is ‘beautiful’, but at having created by sheer determination, a market which for a number of years had been cruelly elusive. The final twist to the story is that having given away hundreds of pounds worth of butterflies to create a market, I was also bankrupt. On the verge of success, I had to stop selling butterflies and return to carpentry. Another two years passed before I was back with enough money to commission a process capable of turning out butterfly bodies in quantity. At last my dream had come true. Now I have a new home and craft workshop situated in a prime position beside the A5 road at Glyndyfrdwy village, midway between Llangollen and Corwen, Denbighshire. Now people from all over the world are attracted to the ‘Butterfly Man’s’ door to buy a souvenir to enhance their home. In some way’s I’m a little sad that the butterflies are no longer made of wood. On the other hand, the fine quality aluminium wings of the new models will never rust and their nylon bodies will never rot. Even the authentic coloured paints used on the wings are of the finest quality enamels (motor car paints) which should last quite a number of years without fading. Problems will always arise in business I suppose, but I’ve been very annoyed that my success has spawned a number of inferior products. Some unscrupulous people even selling imitations claiming them to be the product of the ‘Original Butterfly Man’.

Some will even use a picture postcard of my home, covered with butterflies, luring people into believing that their product is made by me. I will never be satisfied. You might say my customers feel the same way too. One of them recently wrote in my Visitor’s Book: “What about a caterpillar next?” It’s not a bad idea, someone might well consider trying it. In the ninety’s, I developed four winged butterflies and piggy back types and paint it yourself kits. The development of Ladybirds and Dragonflies were also an addition to my product range. After all my success and ups and downs of business life, the greatest satisfaction I have had yet is to see the happy faces gazing up at my work, and the biggest pleasure I have is when I think of the millions of people that have been caught by surprise by my work dotted about on houses all over the British Isles and many countries of the world. A thing of beauty is a joy for ever and to all those people who have chosen to share their discovery of my Butterflies with their friends, neighbours or strangers who may have knocked on their door, “A BIG THANK YOU”. And to the others who wish to keep it to themselves, “PLEASE DON’T” - I have plenty of others for them to choose.